CALIFORNIA COASTAL ZEBRA?  It was a strange sight, travelling along California Highway 1— the beautiful coastal road.  There, standing amid a herd of cattle was a zebra!  I wondered for some time why a rancher would keep a zebra among cattle.  A little on-line research provided the answer.  It seems that cattle grazing with zebra actually gain more weight.  In the wet season, grass grows fast.  It gets tall, fibrous and unappetizing to the cows. The zebras eat these top shoots on the tall grass.  That, in turn, causes regrowth of shoots at the base of the plant, nearest the ground.  The fresh shoots are tasty to the cattle and they eat more, causing them to gain weight more quickly than fields without zebras.  And, apparently, the cattle and zebra get along with each other quite well. 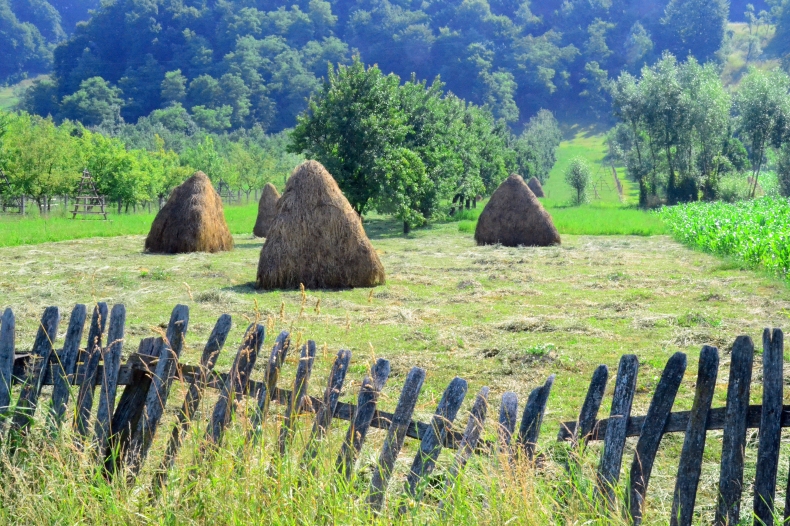 TRANSYLVANIA, ROMANIA, HAYSTACKS: A drive through the rolling countryside of Transylvania is a great way to spend part of a day. Meadows, creeks and distant mountains paint a pretty picture. But the picture would not be complete without the famous Romanian haystacks. Some say they are like this nowhere else in the world. In a country where 60 per cent of the milk is consumed right on farms with 2 or 3 three cows, it’s no wonder that the haystacks—the feed for the animals— are everywhere. At harvest time you’ll see people young and old walking the roads with pitchforks and scythes over their shoulders. Hay-making is a family or community exercise that’s been going on for centuries. The process starts with a central pole with, typically, three angled poles forming a tripod. After the hay has been cut in the field and dried out substantially, it is tossed on to the frame. The whole pile is groomed to a gentle slope so that the water runs off it. That’s the simplified explanation. Search the ‘net and you can practically find dissertations on the art of haystacks! Fun fact/myth: A ‘love fork’ is the name for scars on young men who’ve been stabbed by angry farmers whose daughters have cavorted inside the haystacks.