GIANT AMERICAN FLAG, KENNEDY LIBRARY, BOSTON, MASSACHUSETTS: My two earlier posts about the Kennedy Presidential Library have generated a fair bit of interest, so I’m posting another shot featuring the massive flag that hangs in the pavilion.  Library staff tell me that the flag was designed by I.M. Pei specifically for the pavilion space. President Kennedy requested that his Library not contain a bust or portrait.  Mrs. Kennedy honoured his wishes.  The flag represents President Kennedy in place of a likeness of him.  The flag is massive.  The dimensions are 26 ft. by 45 ft.  Here’s my shot of the JFK Library Exterior and here’s another photo of the JFK Pavilion Flag. 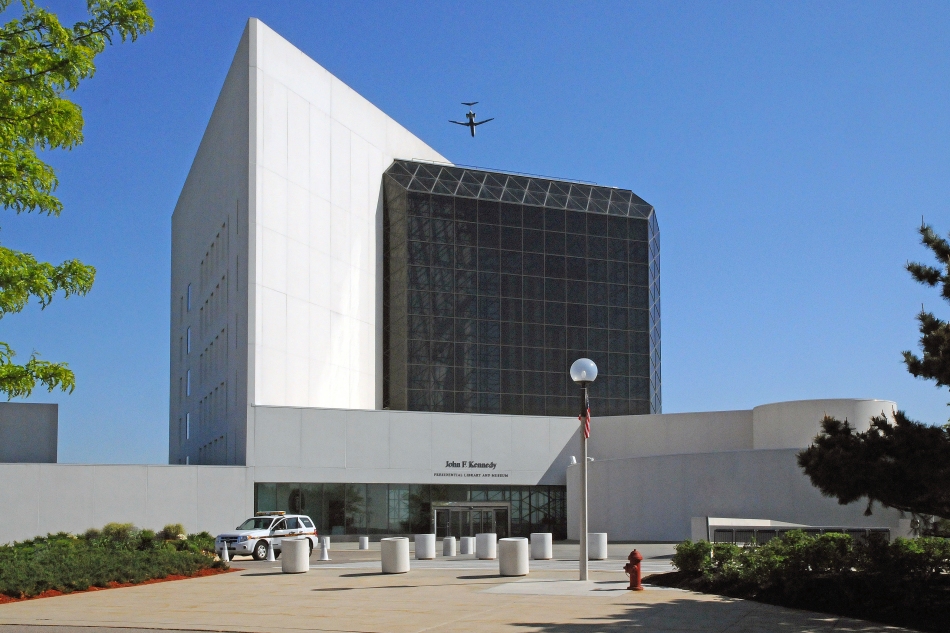 EXTERIOR: JOHN F. KENNEDY LIBRARY, BOSTON MASSACHUSETTS: I love this building by I.M. Pei. See my shot of the gigantic American Flag this other photo of the Kennedy Library.  The building sits on a 9.5 acre parcel of land on Columbia Point, facing across Dorchester Bay. To the east is Boston Harbour and then the open sea. The Library was built on a landfill site. To prepare the site for construction, it was raised 15 feet and beach grasses were planted in tribute to Kennedy’s love of the sea. The building itself is a triangular 10-storey tower. There is a two storey base that houses the library’s excellent exhibition space. In 1991 a 21,000 square foot waterfront addition was constructed to host more of the library’s educational and cultural programs.

JOHN F. KENNEDY LIBRARY, BOSTON, MASSACHUSETTS: Plans for the library began even before Kennedy’s untimely death.  The tradition of privately paid-for presidential libraries began with the Roosevelt library.  In 1961, the Kennedy administration approached Harvard University, seeking space next to its library for an eventual Kennedy library.  Not long after his death, the family stated its preference that the library be the only large monument to the President.  Money was raised, plans were developed and…. stagnation.  After years of challenges dealing with the site— including Cambridge residents concerned about the influx of tourists, the Harvard site was abandoned in 1975.  Columbia Point, on the grounds of the University of Massachusetts was then selected.  Jackie Kennedy personally chose architect I.M. Pei to build the magnificent structure.  What an inspired choice. The Kennedy Library opened in October 1979, more than 15 years after Kennedy’s assassination.  Photo Shot handheld with a Nikon D300, Nikkor 16-85 AF-S, at 30mm, f10, 1/400 sec, 1600 ISO,

THE RED SEAT, FENWAY PARK, BOSTON: Every baseball fan must make the pilgrimage to Boston’s Fenway Park. The place oozes history. Not to be missed is the tour of the park. If you are lucky, the visit includes an on-field walk to the ‘green monster’. The red seat in the right field bleachers (Sec. 42, Row 37, Seat 21) is the place where the longest home run in Fenway Park history was hit. It was hit by Ted Williams on June 9, 1946 off Detroit pitcher Fred Hutchinson. It measured 502 feet.